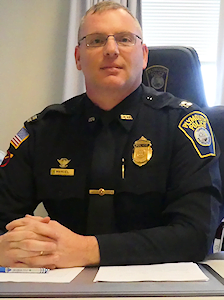 Captain Kevin J. Manuel joined the Plymouth Police Department in 2000 as a Patrolman.   He was assigned as a Mountain Bike Officer in 2009, and in 2011 was trained and certified as a Motorcycle Officer and assigned to the MetroLEC Regional Police Force, a consortium of several law enforcement agencies that provide specialist services to the region.

Captain Kevin Manuel was promoted to the rank of Administrative Captain on October 1, 2018 and then to Operations Captain in December, 2018.  As Operations Captain his responsibilities include the Uniform Division, Detective Division, Prosecution Division, School Resource Officers (SRO”s), as well as Internal Affairs.